The Millennial Generation is defined in various ways around the world. In the US, the term “Millennial Generation” is sometimes used to refer to a broad generation of 17 to 39-year-olds born between 1981 and 2000. More generally, however, it refers to the generation of 20 to early 30-year-olds born in the late 1980s and 1990s. This generation holds new values specific to a digital society and has attracted attention not only in Japan but overseas as well for its potential to change the nature of future consumption. Growing rapidly in recent years, the number of people coming into Japan from developing countries in Asia likewise consists predominantly of Millennials who have benefited from higher educational standards and higher incomes given the economic growth in their countries. Globally, people 29 years old or younger represent 52.4% of the world population, nearly double the 27.9% they represent in Japan, while the Millennial Generation will reportedly make up nearly 20% of the future travel market (UNWTO: The World Tourism Organization of the United Nations).

Millennials in Japan are the generation born and raised in the Heisei Period (1989-present). Having grown up in the slow-growth era of Japan’s post-bubble economy, this generation had more family travel experiences in childhood than earlier generations because their parents were young during Japan’s bubble economy when consumption was strong. As past surveys have shown, this fact has driven travel consumption among Millennials in Japan as adults.* The values and behaviors of the Millennial Generation also garnered attention early in the belief that it would have a strong influence on other generations given the fact that Millennials actively share information, having themselves become a form of media through their use of SNS.

This survey analyzes the Japanese Millennial Generation, defined as adults between the ages of 22 to 28 (born 1989-1995). Members of this generation were in their teenage years, the period of life that most influences the development of a person’s propensity to consume, when smartphones became popular; and they turned twenty after 2009, by which time Japan’s job crunch had mostly ended. The survey also compares attitudes toward international travel by comparing this generation in Japan to similar age groups in Korea, Indonesia, and Australia, all of which are Pacific Rim countries like Japan and mainly use airplanes to travel overseas. These three countries were chosen because of their diversity and for the significance of their relationships with Japan: Between Korea and Japan there is a lively flow of culture and people, and the countries share many similarities; Indonesia, as one of Asia’s developing countries, is in a period of economic growth and the number of its travelers to Japan is growing rapidly; and Australia, which has a different culture from that of Asia, has a long history of traveler’s frequenting Japan. The survey examines how the values and communication skills of the Millennial Generation affect each other across countries. 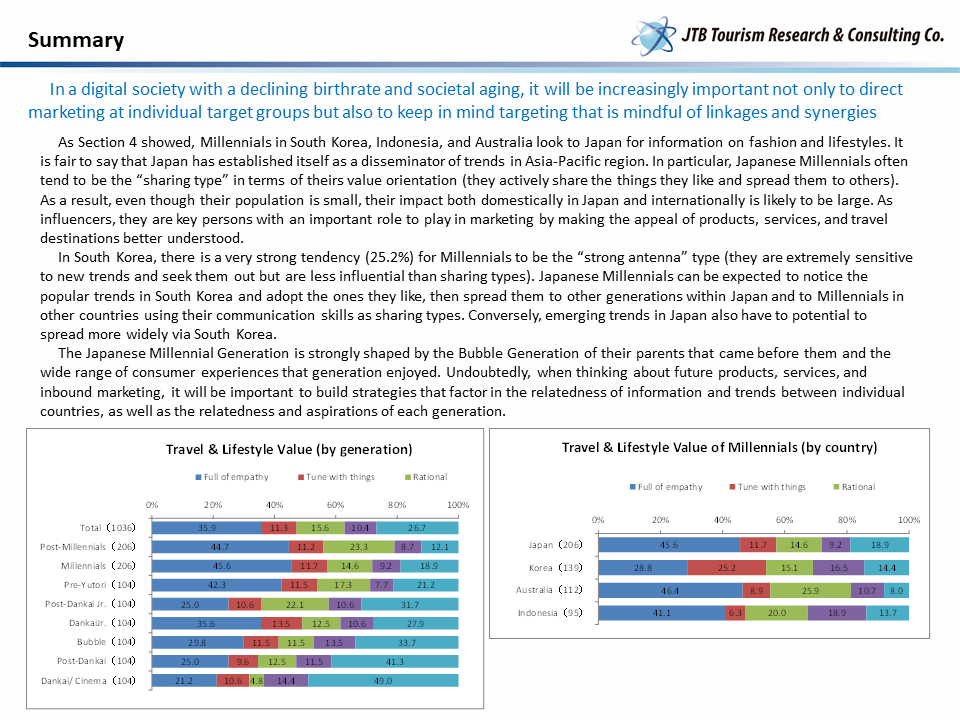 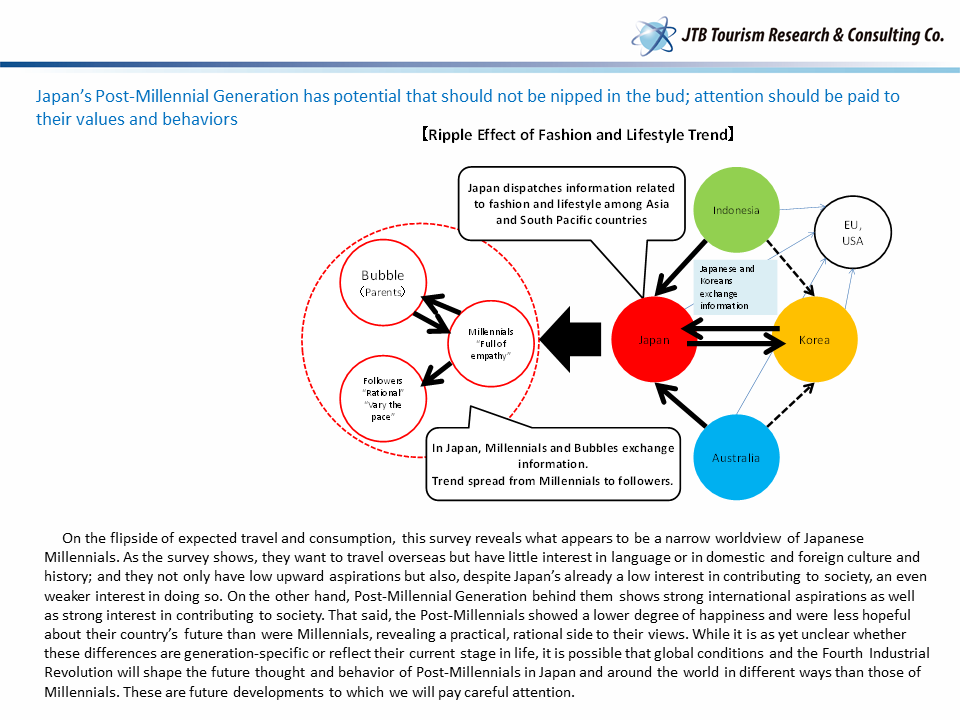