Fifty-five years have passed since the liberalization of overseas travel in 1964. At the time of liberalization, the number of Japanese overseas travelers was approximately 8,000 people, a number that broke 18 million for the first time in 2012. While that number subsequently declined and remained low into 2015, it rose to an all-time high of 18.95 million people in 2018 (6.0% year-on-year increase) and has reached a cumulative January-May total of 8.0214 million people in 2019 (9.0% year-on-year increase),* bringing the possibility of achieving “20 million in 2020” into focus.
*Published by Japan National Tourism Organization

According to our same survey from last year and Ministry of Justice immigration control statistics, a generational shift in consumption is underway in overseas travel as the Baby Boom Generation, which has driven overseas travel in the past, has mostly entered their 70s and finished with overseas travel. Meanwhile, despite a stereotype that younger people do not travel, the current young-aged, digitally native Millennial Generation and, behind them, Post-Millennial Generation (Generation Z) do frequently leave the country and are gradually becoming a driver of travel. At the same time, however, the population of Japan has been declining since 2010, falling by 1.61 million by 2018. Even if the near term looks strong, it is unavoidable in the future that the Japanese overseas travel market shrink.

This survey builds on that of last year to better understand the state of overseas travel in 2018 and the first half of this year while identifying the travel characteristics of the current younger generation, which is now the new main player in the market, in order to reflect on the kind of environment that will encourage a greater number of people to travel overseas. 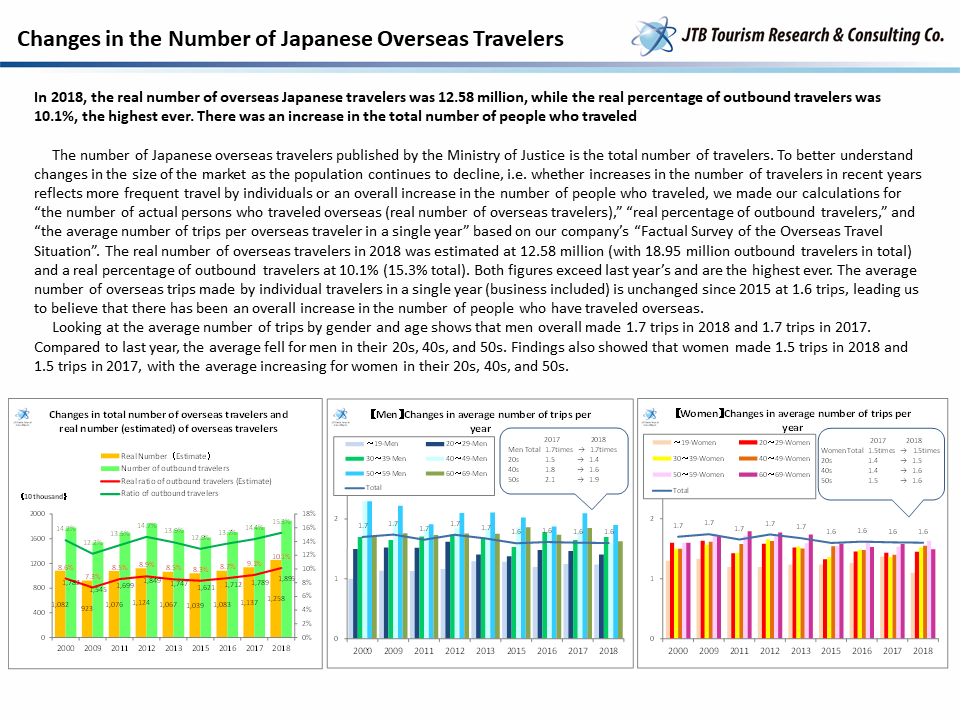