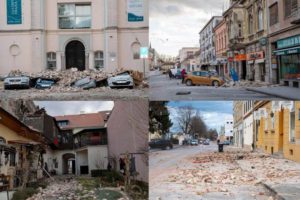 My father’s hometown Croatia became independent almost 30 years ago. The transition from a communist to democratic system required to overpass many challenges, and today with a 4.1 million people, Croatia is a 28th member of the European Union as well as the member of NATO. Croatia is a country known for its beautiful Adriatic Sea, 10 UNESCO World Heritage sites, 17 Intangible Cultural Heritages and delicious gastronomy.

No one could imagine Covid-19 virus will change the world as we knew it just a year earlier. As many European countries, Croatia is also delivering an unprecedent fight to overcome the virus which is continuously mutating, and it might turn out to be the toughest battle ever. The future will tell us. After the first lockdown in April, Croatia could reach zero new infections and after lifting the strict regulations, in May 2020 the government opened the borders to domestic and foreign tourists, and for the period January-December all cumulative overnights reached 50.05% of last year’s record figures, which is a respectable result in the “Covid Era”. Everything looked going on the positive direction when the new infected figures started to skyrise and the record 4,620 new cases per day in December. The strict living regulations were reapplied and like many countries, Croatia is also facing a hard task finding the right balance between keeping the population’s health and allowing businesses and commercial activities.

29 December 2020 a 6.4 magnitude earthquake hit Croatia, making deaths, destroying thousands of houses and other material damages, putting lots of families without habitat in this winter season. The quakes hit Croatian continental regions, devastating Petrinja, Sisak, Glina and surrounding villages. Currently, Croatian government is inspecting each house and already 2,500 are announced as not livable. Within them, there are also houses which were rebuilt after the war. As a country with few earthquakes, Croatian building were not standardized for, and that is one of the reasons for the important damages. The biggest challenge is considered to be securing housing for the victims. The government is prioritizing Covid-19 vaccination in the disaster area.

After the war, Croatia could revitalize tourism industry in a short period. On top of it, Croatian people are friendly and usually speak three to four languages and that is one of the reasons more than 17,3 million foreign visitors who came to Croatia in 2019 felt welcomed. In 2019, the record year for Croatian tourism, more than 150,000 Japanese visited Croatia.

9 years ago, when the Great East Japan Earthquake happened, many Croatian people showed their empathy for Japanese victims by sending many encouraging messages and funds. There is a famous video showing Croatian people demonstrating against the government, and when the people passed near the Japanese Embassy, naturally they all got quiet and remained until they left the embassy.

People in Japan who heard Croatia was hit by one of the strongest quakes of its history, instinctively started to search the ways to help people in need, sending messages and collecting donations, showing mutual respect between the two nations and the desire to contribute for the life reconstruction.