1．Consumption and travel interest among Japanese

At the end of last year, the Working Group of Indexes of Business Conditions in the Cabinet Office reported that an extended Japanese economic expansion was underway since December 2012, the second greatest in the post-war era, greater than even the “Izanagi economy” of the high economic growth period. While not necessarily felt in everyday life, consumption-mindedness is strong, including toward travel, as evidenced in the fact that last year saw the highest number of Japanese traveling overseas ever, with forecasts predicting even greater numbers this year.

While the BOJ’s Opinion Survey on the General Public’s Views and Behavior, which looks at changes in lifestyle from the previous year over a long span of time, revealed some impact from the consumption tax increase since April 2014, an increasing percentage have responded that they “Have become better off” since 2013, when the BOJ’s unconventional monetary easing policy began, and fewer report feeling “Have become worse off” （see Figures 1）.

（Figures 1）Changes in Lifestyle from the Previous Year 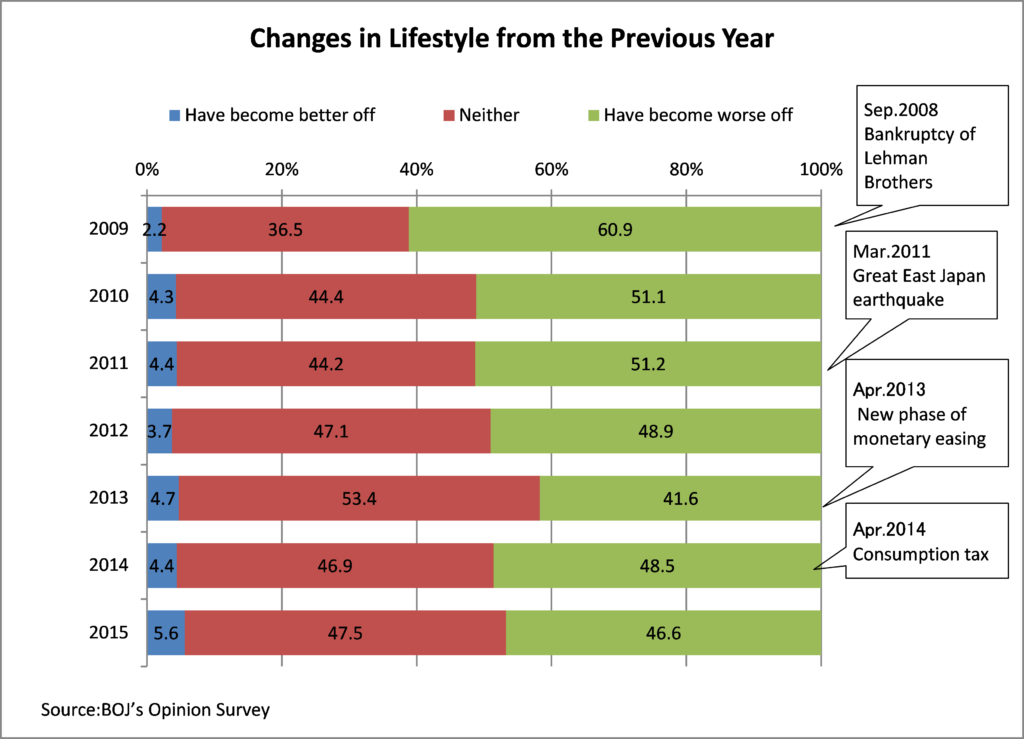 Market for overseas travel expected to grow, even with declining population; Generational change already under way

Overseas travel had been stagnant until 2016, when it began to strengthen, with graduation travel in the spring of that year in particular marking the start of the recovery. With the jobs climate improving and employment rates rising, the increased salaries for younger people was among the factors. The long period of economic recovery that kept going was another factor, resulting in significant improvement in international departures among twenty-somethings (especially early 20s) compared to other generations over the past two to three years. Young people today belong the digitally native millennial generation. Unlike prior generations of young people, this generation travels. While this partly reflects the economy, it is also noticeably influenced by the fact that their parents belonged to the Bubble Generation that celebrated consumption.

Even with Japan’s population on the decline since 2010, the number of overseas travelers is expected to increase, growing the market. On the one hand, international departures by seniors has hardly grown at all. Once the drivers of personal consumption, baby boomers are increasingly moving away from overseas travel as more and more enter their 70s. The generational change-over in consumption has come into view. In their youth, the next generation of seniors enjoyed leisure consumption in an ever-rising economic climate. Unlike the baby boomers in behavior and values, their generation experience more overseas business trips and foreign postings. Key to providers of products and services will be the extent to which they can respond to changing preferences with the generational shift in consumption （see Table 1）.

（Table 1）Changes in Departure Ratio by Gender and Age

The range of economic recovery may not be large, but it has contributed to increased consumer-mindedness because it has been maintained for a long duration. While a consumption tax hike is coming this October, it is unlikely to have much effect on travel this year.

2．Trends among visitors to Japan for 2019

The number of foreign travelers visiting Japan in 2018 reached around 30 million for the first time, as of December 18, despite slightly weaker growth after July for typhoon and earthquake-related reasons （JNTO）. The inbound market for visitors to Japan in 2019 is expected to continue growing. In particular, countries those were strong last year, including European nations like Italy and Spain, Australia, and Southeast Asian countries like Vietnam, Thailand, and the Philippines. With the Rugby World Cup 2019™ in Japan, ceremony of the enthronement, G20, and the Olympic and Paralympic Games Tokyo 2020 just a year away, the year is likely to bring much attention from overseas.

While the inbound Japan cruise market is growing steadily overall, qualitative changes in its makeup are underway.

The inbound Japan cruise market from China, which accounts for most of the volume, has become popular as an easy way for families to enjoy traveling as the number of large casual ships has increased since around 2013, while the market has grown rapidly also because travel on inbound Japan cruises effectively no longer requires visas in 2015. Over the past year, however, as the Chinese domestic economy has slowed and stiffening price competition has driven a process of natural selection, cruise lines have been leaving the Chinese market or moving some ships to Southeast Asian and European routes. As a result, ships calling at port in Kyushu decreased slightly in the first of half of 2018 given its large volume of cruises from China, while ships into the Kanto and Chubu regions have increased.

Among inbound Japan cruise passengers from Europe and North America, it is not just large cruise ships that are popular but also so-called “fly and cruise”-style travel that takes 200-300 people around Japan on a small-size luxury ship after they arrive in Japan by plane. As a result, there is a growing number of ships calling at relatively small ports, like Karatsu, and changing the image of cruises away from that of thousands of people arriving all at the same time. 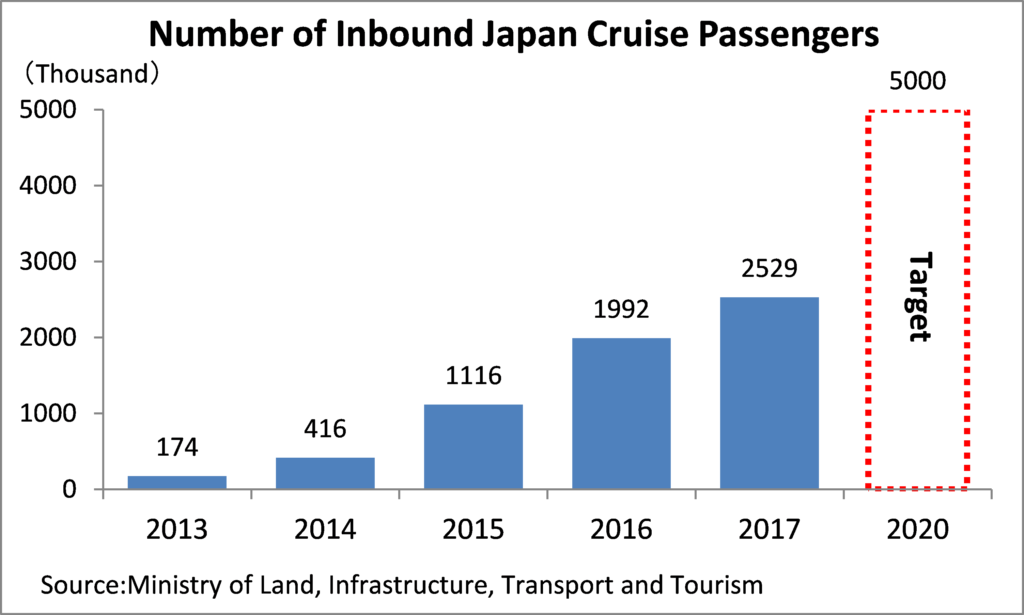